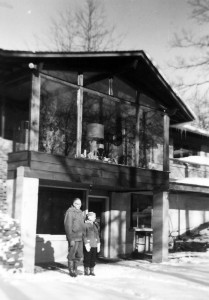 Our East Irondequoit house (145 Huntington Hills South) is one of 4 adjacent homes designed by Don Hershey in the 40’s. As with other homes he designed, Don would stop by regularly to inspect the work at these sites and make sure it was  being done according to his design. The original owner, Clarence Maier, did a lot of the work himself, hiring the Hershey contractors for help with the rafters and some other aspects. Clarence slept in a hammock strung between 2 oak trees on the property during the building process.
We had the good fortune to get to know Clarence after moving into our house in 2004. He visited from time to time and shared his memories of the house. He also shared some photos of the building in progress and the subsequent life he made in it with his family into the 1980’s. Clarence passed away June 5, 2012. We will miss him very much. 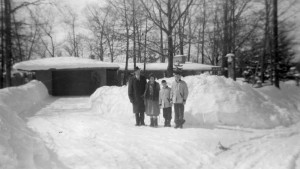 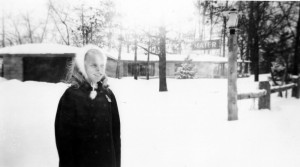 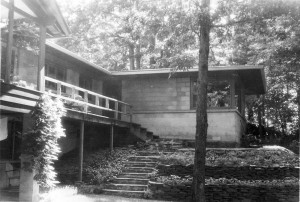 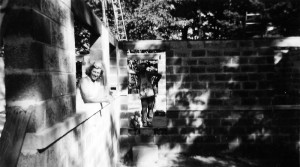 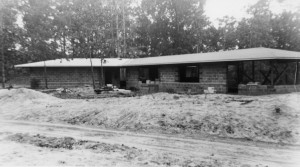 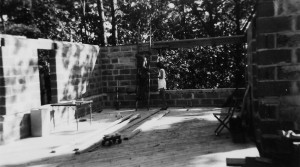 This is the obituary that ran in the Rochester, NY Democrat & Chronicle:
Clarence Charles Maier, of Columbus, born March 31, 1912, went to be with the Lord June 5, 2012 at age 100. He was born and raised in Rochester, New York to George and Mathilde Maier. Clarence was preceded in death by his beloved wife Dorothy and his four siblings. Clarence retired from Eastman Kodak Co. in 1975 and continued his sideline of glassblowing for many years. A man of deep faith, he was active in church life wherever he lived, in New York, Florida, and Ohio. His cheerful, friendly spirit impacted everyone he met. He will be greatly missed by his daughters, Jacqueline Maier and Jill (Wayne) Davis; grandchildren, Brent (Melissa) Davis, Nate (Anna) Davis, and Sarah (Shawn) Price; seven great-grandchildren; sister-in-law, and several nieces and nephews. Funeral service will be held at 11:30 a.m. Friday, June 15, 2012 at SCHOEDINGER WORTHINGTON CHAPEL, 6699 N. High St., where family will receive friends from 10:30 a.m. until time of service. Pastor David Vandenbergh officiating. Interment Kingwood Memorial Park. In lieu of flowers, memorial contributions may be made to Benevolent Care Fund, Worthington Christian Village, 165 Highbluffs Blvd., Columbus, Ohio 43235. To share memories or condolences, please visit www.schoedinger.com.