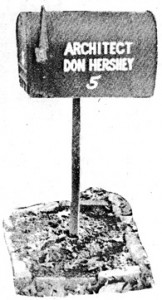 For a man who appreciated the effect of stone as a building material, Don came to a good place when he settled in Rochester. Medina sandstone, which lies under much of this area, was plentiful. strong, and “a warm, rich color,” Don says. When he designed his own home in 1939, he decided to use stucco, however, instead of stone, because it would be less expensive. He recalls standing on his lot one day when the house was partly framed.

“A truck pulled up loaded with stone. I knew the company dealt in building materials, and the driver jumped down, introduced himself and complemented me on my design. Then he said (he was a good salesman), ‘Mr. Hershey, I’ve been watching you build, and I think this house calls for stone.’ His truck was loaded with Medina stone which he had procured free by removing it from where it was stockpiled near the canal in Medina. He took a hammer and hit a piece; it split clean and level. He sold me ten loads for $40 a load.” 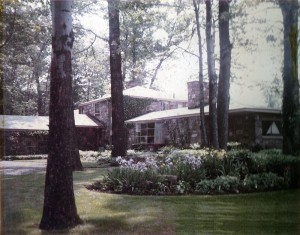 Later favoring this stone in many of his buildings, Don became known as the “Medina House architect.”
(The above is an exerpt from the Eldercraft Newsletter 1982) 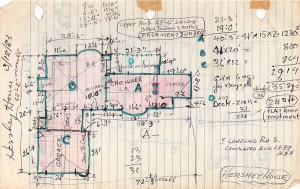 Read this story about how they decided where the 490 Expressway cut through between the homes.