Thanks to Jim Weller for this interesting contribution:

In the mid 1950’s, Pres. Dwight D. Eisenhower determined a national interstate highway system was needed to enhance commerce and to bolster our defense system. New York State jumped on this idea and utilized the 90% federal money to construct the NYS Thruway. When the need/opportunity and the Federal money came along to connect downtown Rochester with the Thruway, the State of NY and the County of Monroe determined the old roadbed of the Roch., Syracuse and Eastern Electric Railway (the trolley) would be ideal for this purpose. Better yet, this roadbed was owned by the County of Monroe which acquired it after it was abandoned in the 1930’s. The plans drawn up by the NYS DOT called for the old trolley line to be used for the roadbed with additional abutting lands to be acquired as needed by eminent domain. This is where it gets interesting. (click on image for enlargement) 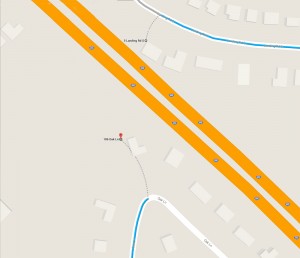 Just east of Penfield Road, the old trolley line ran midway between the houses on Landing Road South and Oak Lane. The story is told that the house at 106 Oak Lane was on the list of several houses whose backyards would be taken in part for the new Rte. 490 right-of-way. The problem was an asparagus patch in the back yard of 106 Oak was tended by an old guy who doted on his asparagus. Old guys are usually not a problem for the DOT. They don’t argue or listen to pleas to spare the land, they just send a form letter stating we are taking the land and the bulldozer will be along next month. This old guy was different. It became known he was not amused by the prospect of losing his asparagus patch. And so the DOT reduced the amount of land it was taking to exclude the asparagus patch and moved the highway closer to houses on Landing. That’s why Rte. 490 narrows a bit and bends a little to the northeast just past Penfield Road and why the Don Hershey house at 5 So. Landing Road now has a sound wall just a few feet from its western edge.

By the way, the old guy who tended this particular asparagus patch was Marion B. Folsom, the architect of the Social Security System and the U.S. Secretary of Health, Education and Welfare. As a member of Eisenhower’s Cabinet, he sat just across the table from the Secretary of Commerce and other Washington big wigs who approved Federal money for highway construction. Who would have ever thought asparagus could be a planning element in highway design and funding.