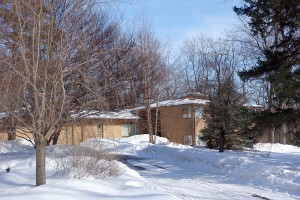 We were in Pittsford this week and decided to drive by some Hershey homes there. We began with Stoney Clover Lane with its huge lots and the large homes. Hershey designed 4 on this street. Number 2, built in 1966 for Mylin (Duke) Cramer, is the first house as you turn onto Stoney Clover from Stone Road. It’s hard to see the home due to the number of trees but the corner windows and large overhangs are there along with the interesting orientation of the home to the street. It is 3,000 sq ft and has an indoor pool.

Further down is number 18. Billionaire Malcom Glazer hired Hershey in 1967 to design this sprawling home for him. It was one of Don’s favorites. And quite large – 5024 sq. ft. on 2 acres.

We suspect that number 14 is the fourth home although we can’t be sure since Hershey didn’t indicate a number in his books. He did note that Robert Dickerson hired him to do an alteration to a home on Stoney Clover Lane in 1958.

2 Replies to “Some of Hershey’s Pittsford Homes”