Karen Hershey Morrell, the youngest of the late Robert (Bob) Hershey’s girls wrote the following to us:

I wasn’t sure you had captured this anywhere on the site but I wanted to be sure you knew that my grandfather was related to Abraham Lincoln. In fact, he was a 4th cousin! We are related down the James Lincoln line who was Abe’s uncle. My grandfather Don’s mother was named Sadie Lincoln and she married a Hershey. The couple had 5 sons and one of which was my grandfather Don! I love to share that interesting fact with people! So we are related distantly to Milton Hershey (founder of The Hershey Chocolate Company and the “company town” of Hershey, Pennsylvania) but also to Abraham Lincoln! Here is a picture that my grandfather drew up that shows the lineage and relationship to Abe. (Click on the image for an enlargement.) 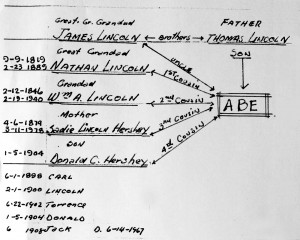 I also have a first cousin named Tad (Ken Hershey’s oldest son was named after one of Abe’s sons). So there you have it!!!

One Reply to “Hershey was a Fourth Cousin of Abraham Lincoln”